One of my photographers friends birthday came up and so I wanted to come up with a unique and fun gift idea. Since I love to crochet I thought maybe I can combine my passion with a photography related craft. 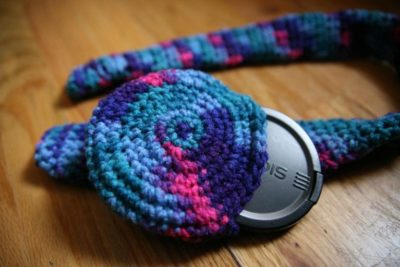 I found a really good tutorial here for a Strap but what I’m also always missing is a place to put my Lens Cap. So I decided to come up with a pattern myself and I really like how it turned out.

It’s a great gift ! So easy and fun to make!

This is my first crochet Tutorial 🙂 Enjoy!

Additional Rounds : Add 1 extra sc stitch to the number of sc stitches between increases (an increase is done by making 2 sc in one stitch). Until the size is a little bit bigger than the aperture of your biggest Lens Cap.

Make two and stitch them together using sl. Leaving an opening wide enough for your Cap to fit trough.

Finish off and sew each end on to the Pouch. Attention make sure the opening of the pouch faces upwards so that the Lens Cap cannot fall out while carrying.
The Pouch is detachable because I wasn’t sure if my friend is going to need it. And also you could attach it to whatever you like better. (camera bag pack, tripod…) 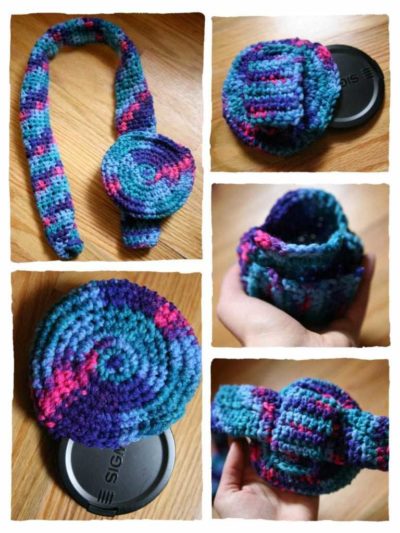