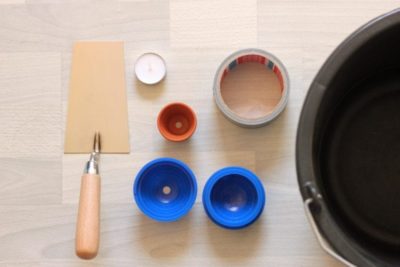 First you have to mix the cement and Quartzsand to make concrete. We mixed 1 part quartz sand to 2 parts cement in our bucket. Be careful it’s a bit dusty. If you want you can wear a protective mask to keep you from inhaling the mixture. Add as much water needed to get a yoghurt like texture.

You could use quick drying concrete mixes but it’s way more expensive than mixing your own. Especially if your planning to make a bunch of concrete projects or a ton of Death Stars 😉 I recommend to mix your own as it’s really not that much extra work. 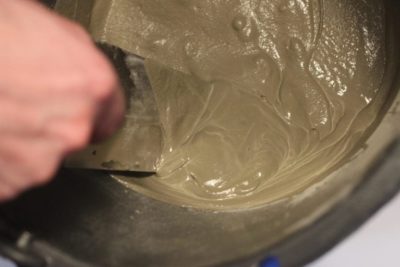 Tape the bottom of the terracotta pot shut so the concrete doesn’t flow into it while pouring it into the mold. I used just a stripe of duct tape. 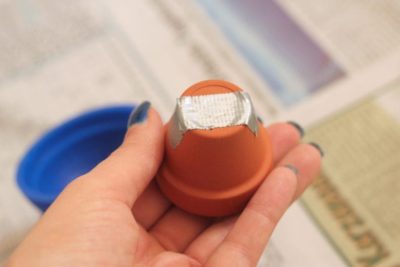 Prepare your Death Star molds. I heard you should use some oil in the forms to make it easier to remove so I tried that but can’t really recommend it. It worked just fine without oiling it first. 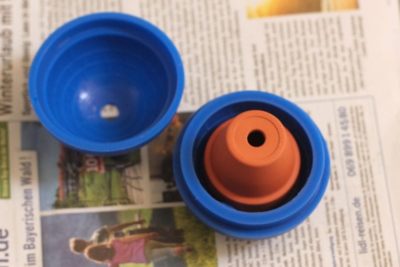 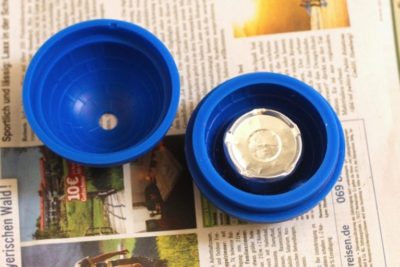 Place the terracotta pot and the tealight into the part of the mold without the hole. This will be the upper side in the end.

I even made one without any extras. It will make a great paper weight or bookend for the Star Wars Fan in your life (or yourself of course).

Now let’s get messy! Start pouring the concrete into the molds. I did the lower part first because I wanted to make sure I cover the tealights and flower pot correctly. I placed the upper part on top and stuck the funnel in the already excisting hole to fill the form up. I didn’t fill it up to the top so it will still be able to stand as the molds are perfectly round.

As you can see in the pictures it’s quiet messy so you might want to wear gloves. The concrete washes off really easily though. 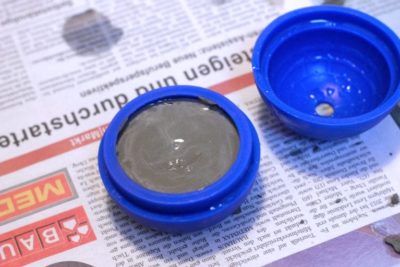 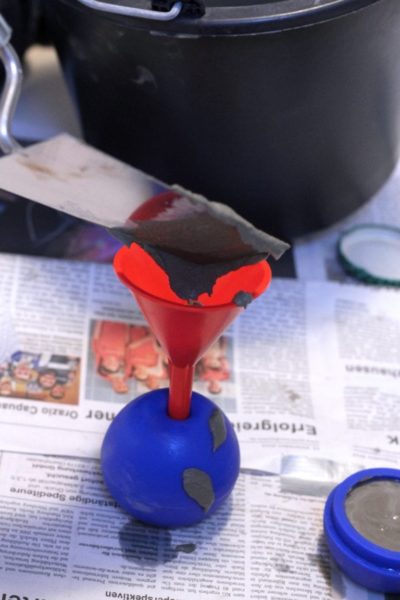 Gently shake the mold a bit to remove bubbles. You have to be really careful or the flower pot or tealight will move around. I still had some bubbles in mine in the end. Probably because my concrete mixture was a little too dry. Next time I’ll add a splash more water.

Funny little side note: While living in America my hostkids even gave me the nickname Anakin for a while since Annika isn’t too far away from that haha.

Remove the molds and admire your work! This Concrete Death Star How-To gives you the opportunity to create something for the Geek in your life. It makes such a great gift. Not only for Christmas but it also will work great as a Birthday gift.

Get creative with the plants. I used an offshoot of one of my succulents. The Concrete Death Star tealight holders turned out a little crooked so I will have to place something underneath to prevent wax dropping  somewhere where it’s not supposed to be.

I’m going to give them away as Christmas gifts but I’m 100% sure I’m going to make more. It’s quiet addictive and now that I have 5kg of cement and 10kg of quartz sand (They only sold those huge packs!) Update: Gave one to my uncle as a Christmas gift and he dropped it onto the kitchen floor! Both the kitchen tiles and the Concrete Death Star are still intact so I guess it’s safe to say its indestructible.

I’m going to make everything possible out of concrete so be aware of what’s coming your way next year 😉 Maybe even more Star Wars related things!

Here’s another cool Star Wars Concrete Death Star Craft at Homemade Modern which also inspired me to make the planters and tealight holders. 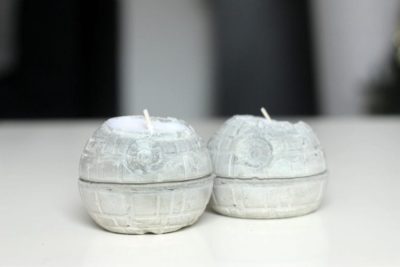 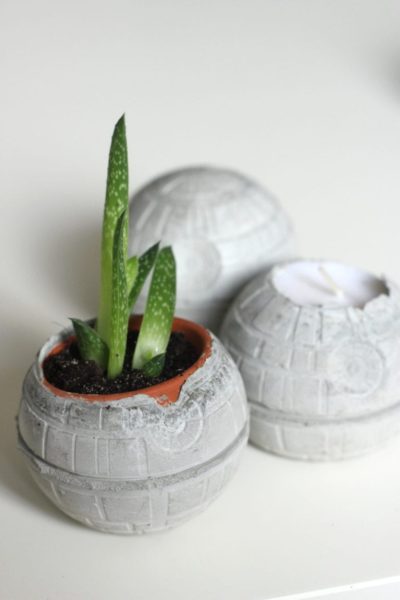 May the force be with you!

Oh and you will never guess what happened to me. I used to work for a german lifestyle magazine and got to interview Daisy Ridley. Like what?! You can watch it here: